The Wonder of the Munich Subway
— 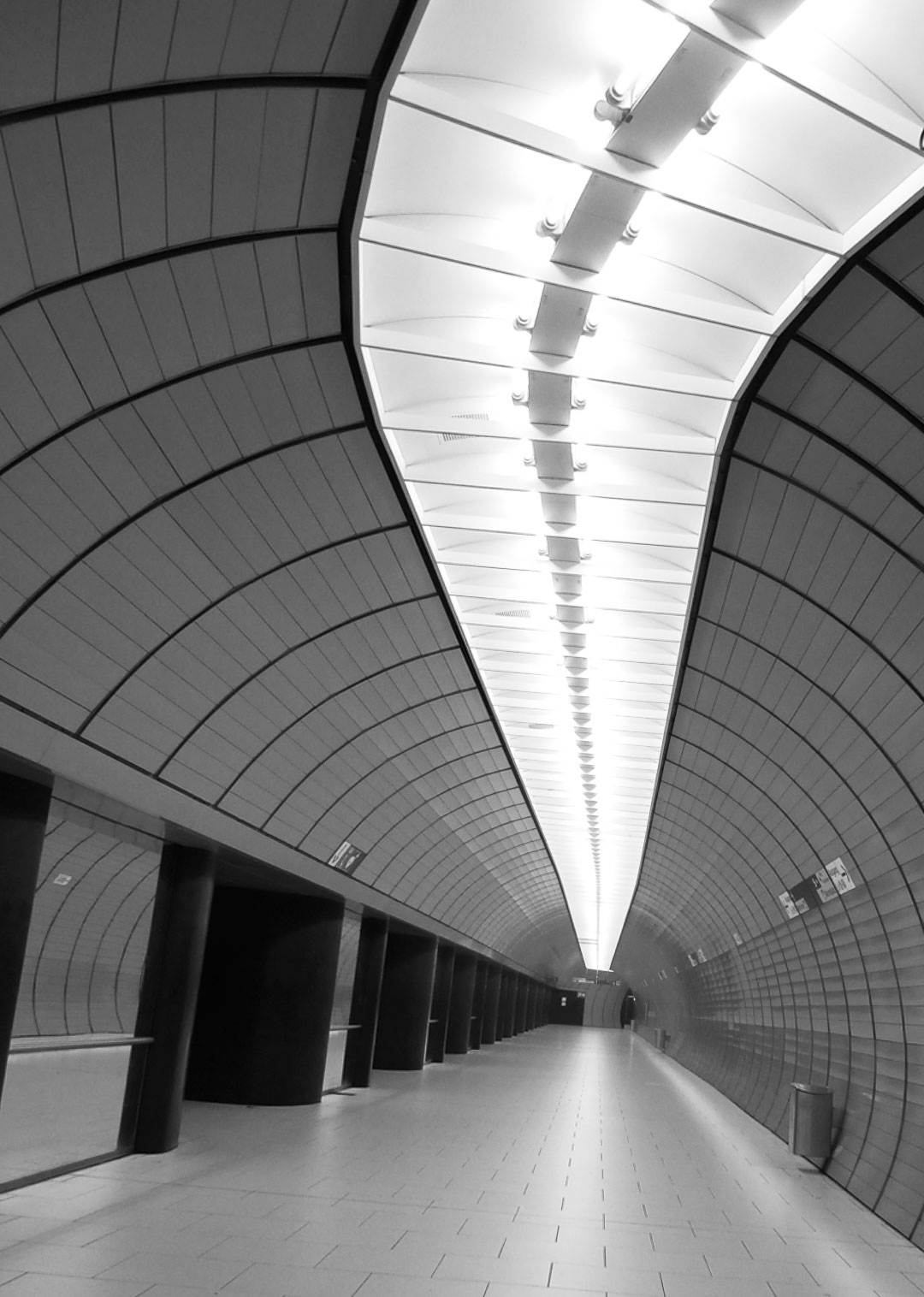 The Munich U-Bahn is a spectacular sight to see, and it sits below an equally beautiful European city. Their stunning transport system has unique architecture, colours, textures and typography.

It is quite a young subway system which only began in 1972 but now has 98 stations. The early stations were quite plain but as it grew the stations became more and more adventurous in their design.

The first station I went to was Marienplatz which is one of the most stunning with it's striking orange panels curving above you as you step onto the platform. Designed by Alexander von Branca and opened in 1971, it has two platforms at either side of the City Hall, this was done deliberately to avoid having to dig directly under the City Hall.

Luckily I was there early in the morning without many commuters so could get some great photos of this really photogenic place. 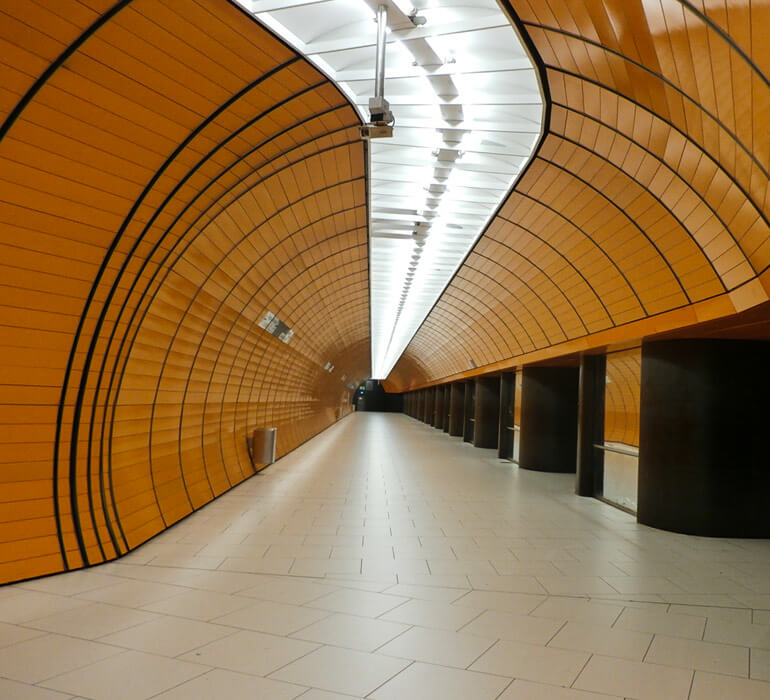 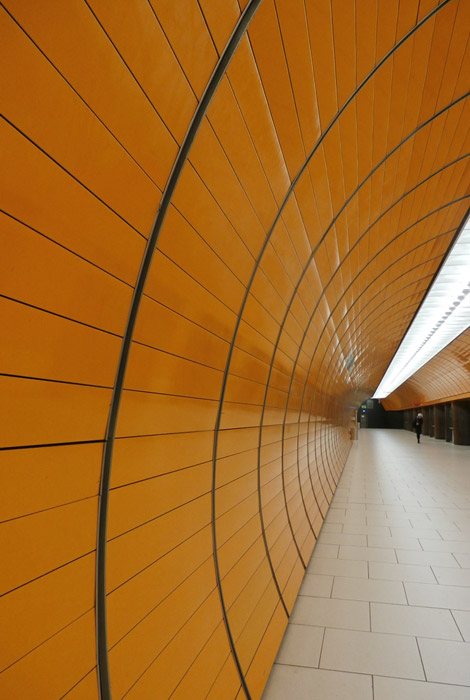 This station was opened in 1983 and at the time was one of the more colourful designs. Built for the International Garden Show it became known as the ‘flower line’.

The simplicity of the design is what I found most striking, with a range of greens along the wall, and a subtle curve along the top, this station is similar in design to others on its line such as Westpark and Holzapfelkreuth. 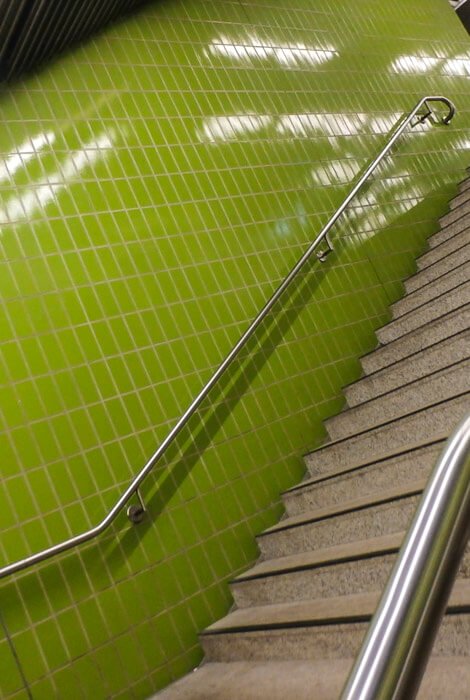 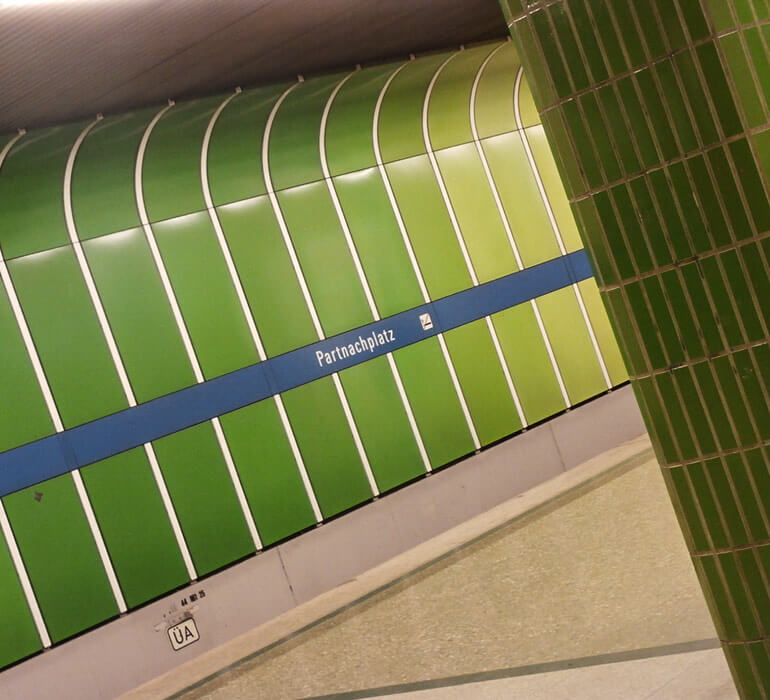 Großhadern is an unusual station with an earthly textured wall, painted by Johannes Klinger, which represents the geographical layers of where the U-Bahn was built. It has yellow pillars and a swerving aluminium structure that runs along the ceiling of the station with a clever purpose:

A striking and unique U-Bahn station, the shapes, colours and textures make it one of my favourites to explore. 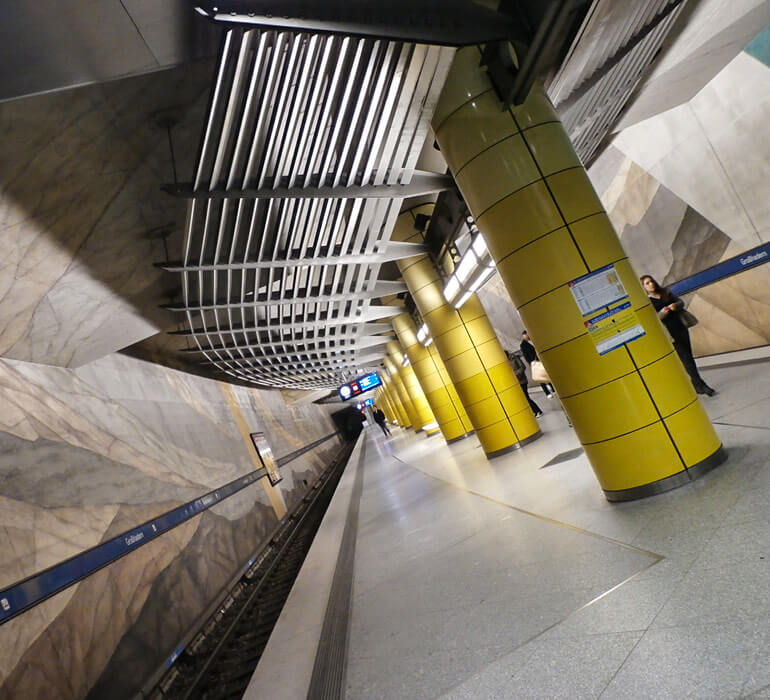 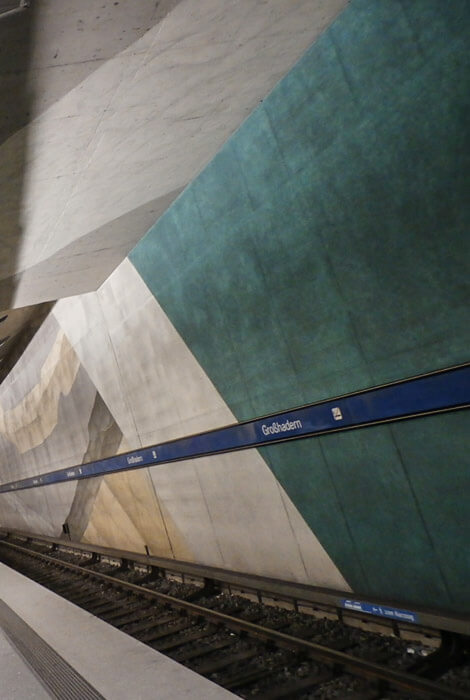 This station looked like one of my studded belts, but much larger! It is quite an eye-catching station with stainless steel pyramid-shaped pieces, that reflect the light shining on them from the lighting beams above. 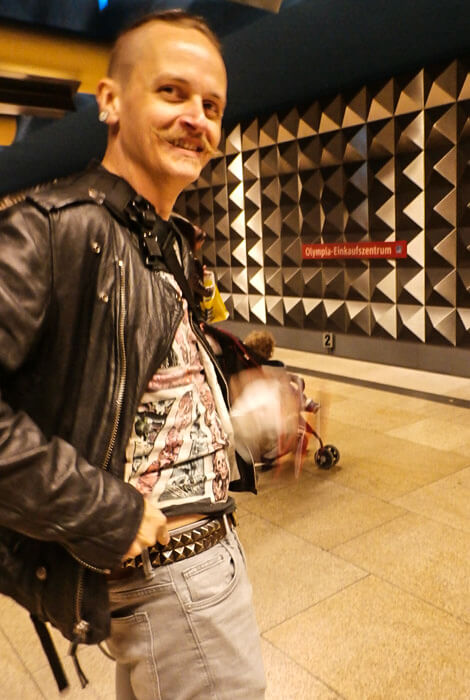 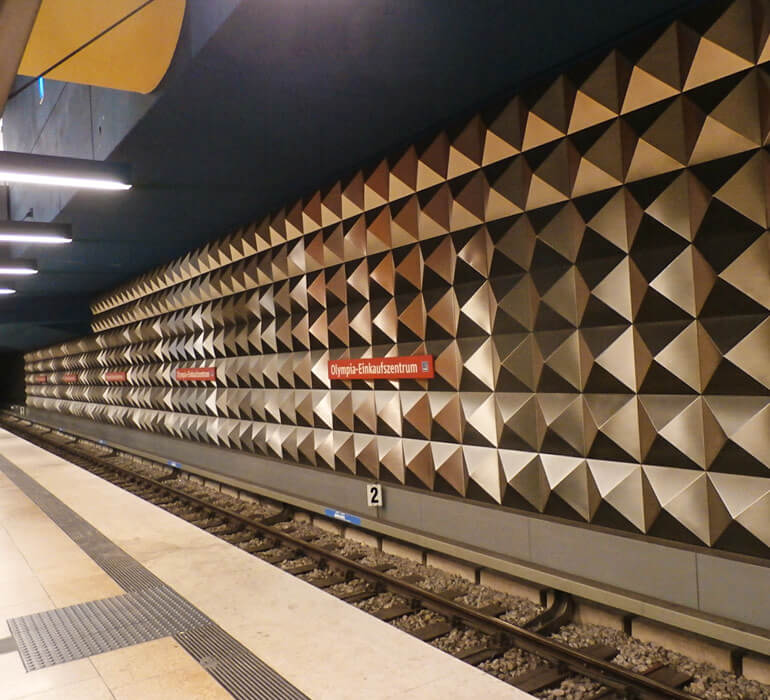 A beautiful station with a spectrum of colours like a colour chart along the walls. This was a station I was most keen to see and it didn't disappoint. One of the most colourful stations in Munich, with panes of glass covering the walls of different colours and widths, with an interesting wave-like shape rising from the coloured panes below. 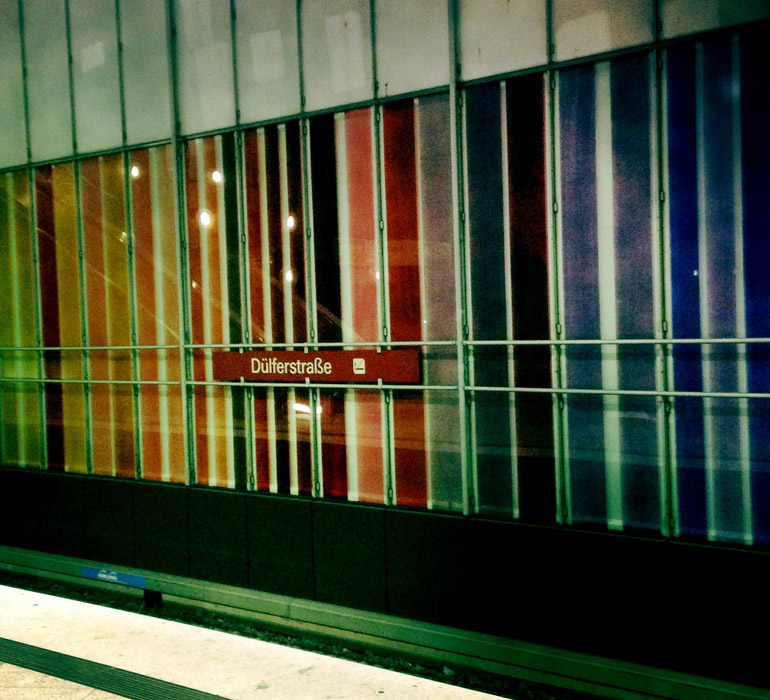 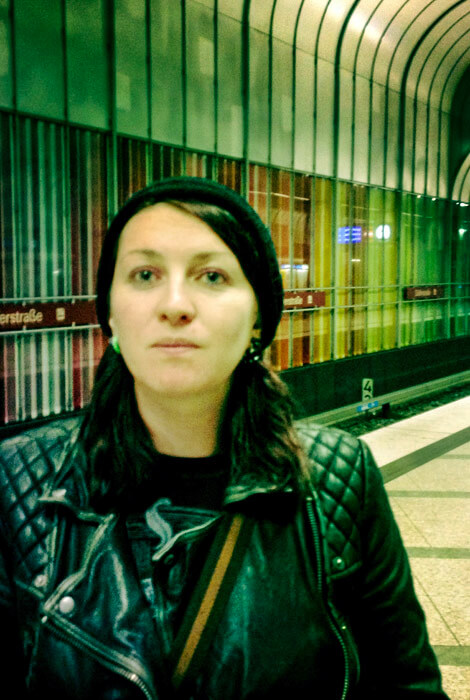 Another colourful station is Georg-Brauchle-Ring, with a spectacular view all the way through, which is achieved as no pillars are present to obstruct the onlooker.

Designed by Franz Ackermann, the walls have strong coloured panels as well as panes with images from the local area. This is another eye-catching station which I enjoyed exploring and photographing. 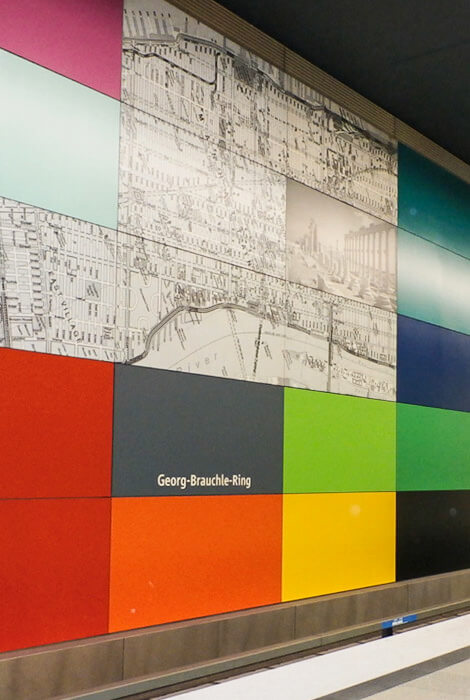 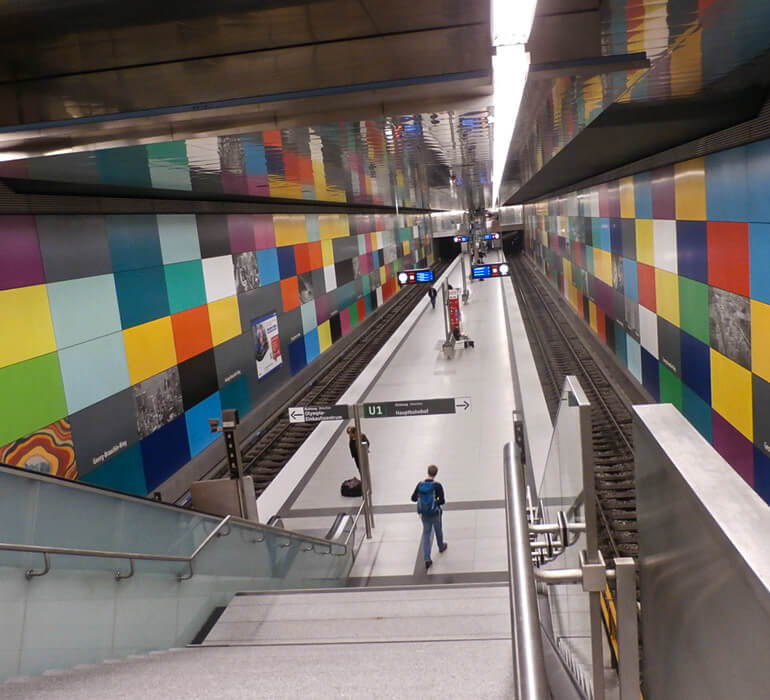 The textured walls feel like they have been there for centuries, giving this station an ancient and historic feeling. The walls are actually made from untreated bored piles, and with the ceiling covered in reflecting aluminium panels, the dark walls become lit up in a eye catching way. 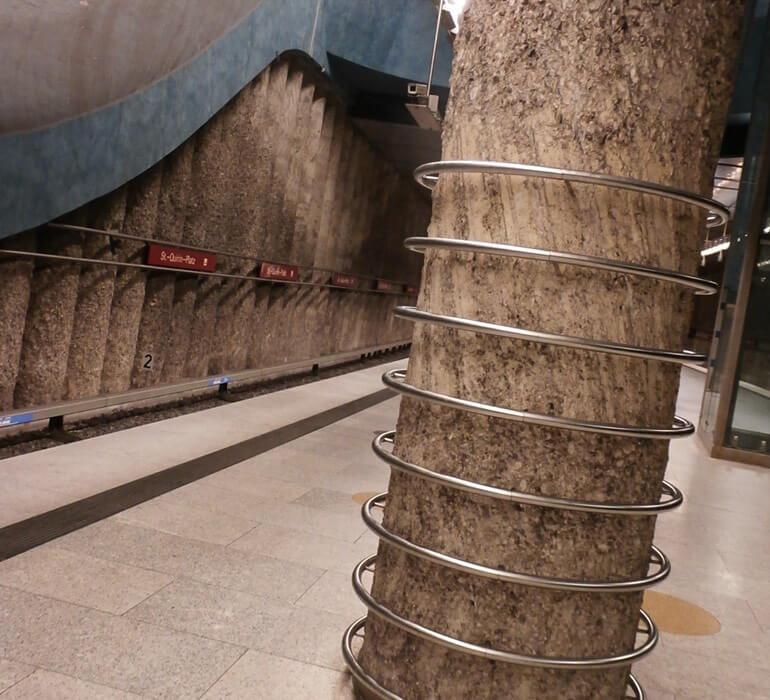 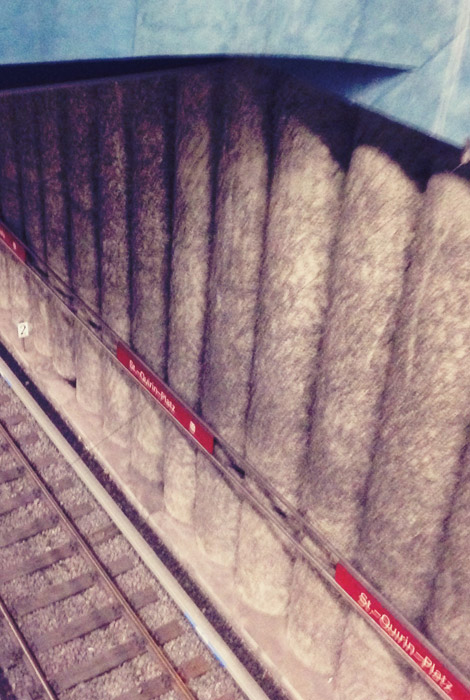 Stepping onto Westfriedhof is like stepping onto a film set, it looks like a place too exceptional for public transport! It has an atmospheric lighting system with 11 huge lampshades overhead, bathing the platform in blue, yellow and red hues. 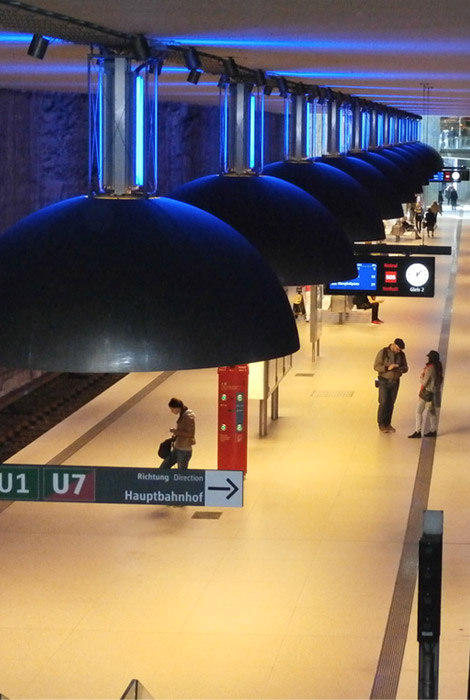 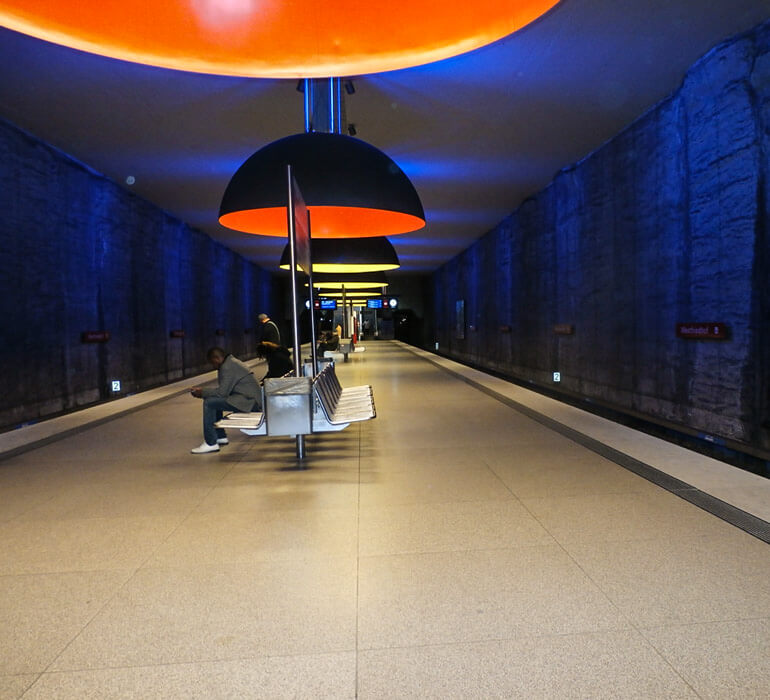 These were the highlights of Munich subway but all the stations are special in their own way. When visiting Munich, the sites above the ground are stunning but don’t forget the subway stations that live below the city.